Our home is where our heart is: A short review of Romi Meitei’s film Eikhoigi Yum

The film has brilliantly captured social issues beyond the realm of politics. One could also sense the changing faces of the Loktak Lake after a series of events. The pain experienced by the protagonist epitomizes the general suffering of the fisher-folk.

Our home is where our heart is. When we get displaced from our home, there is no reason for a heart to flutter harmoniously. The whole body is messed up and it is going to have a serious malfunction.

Romi Meitei’s Eikhoigi Yum (Our Home) portrays the joy of having a home, dreaming of a bright future and a peaceful life. The whole film theme paddles around the Loktak Pat and its dependents. It tries to show day to day life of those who live in homes built over floating biomass called Phumshang.

The film delineates life as it exists in reality even though many have failed to acknowledge their existence. 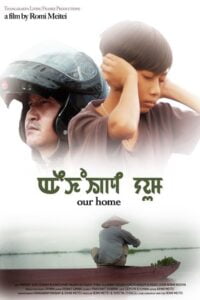 Loktak Pat (Lake) is an important part of the Manipur valley. It is the mirror of indigenous civilization. It is one of the many sources of inspirations for artists in their endeavor to engage in artistic vocation. It is like a vast canvas where artists can choose to paint with multiple hues.

When an evictions notice was served on the fisher-folk dwelling on the biomass or the phumdis under the Loktak Protection Act, 2006, their worst fear became true. Their means to livelihood were snatched away.

Most of these simple villagers eke out a living from selling fish. Many elites and residents of the urban centres in Manipur at times justify the eviction of these fisher-folk after being misinformed about the environmental damage caused by them. They think that phumshangs pollute the Loktak Lake. The polluted rivers of Manipur after passing through Greater Imphal flows down the Loktak Lake.

The film has brilliantly captured social issues beyond the realm of politics. One could also sense the changing faces of the Loktak Lake after a series of events. The pain experienced by the protagonist epitomizes the general suffering of the fisher-folk.

Though there were enough rooms for seamless editing, lighting, costume & make up and even camera works, they have all been subdued by the strong overall narrative of the film. Technically, the film is better placed than any other productions based on such themes. The soundscape of the entire film takes one to a balmy night’s adventure across the lake of sorrow.

The cast of the film include Master Ningthoujam Priyojit, Sori Senjam, Nganthoibi, Bhumeshore and others. They have done justice to the characters etched out for them. Made and produced by Sheetal Chingsu  and ace film director Romi Meitei, the film has Kangabam Bikramjit as Cinematographer, Johni Meitei as the editor; and Sound by Debajit Gayan.

There is need to restore law & order for complete…