The  earth cutting was completed in 2015 with an initial funding under the “Special Plan Assistance (SPA)”. However, it was discontinued because of changes in the planning commission’s policy and subsequently the pattern of the funding was stopped under the SPA. This had slowed down the process of the project resulting in delay.

With speculations doing the rounds for many years with regard to the “foothill road” in Nagaland, the Nagaland Foothill Road Co-ordination Committee (NFHRCC) has on Wednesday said that the stretch covering around 395 Km from Dimapur to Tizit, Mon, along with the alignment works have already been completed way back in the year 2015. However, the project is still awaiting the approval from the Ministry of Road Transport and Highways, for the “Trans-Express Highway” which is being initiated by the government of Nagaland.
NFHRCC had appealed to the land owners not to take any compensation(s) for parting their lands as most of the “mega projects” are being hampered due to issues arising out of land compensation issues.

A source from the NFHRCC informed this correspondent that it was due to this issue that the “foothill road”, which is an extraordinary project, got delayed. After the villages had given “No Objection Certificates”, the Nagaland government invested around Rs 70 Crores initially between 2013 and 2015 for earth cutting.

Accordingly, the NFHRCC covered is the first phase from the stretches between Dimapur-Niuland and including Doyang Bridge (Wokha).
However, it was known that the entire foothill road construction from Khelma, Peren district, and Tizit, Mon district, both bordering Assam, had to face many challenges from “unwanted elements”. Despite this, the NFHRCC took up the first phase from Dimapur to Tizit, and the government of Nagaland has invested around Rs 67 Crores. From this fund, the committee had completed the Doyang bridge and earth cutting from Dimapur-Tizit. Dimapur to Tizit, Mon, covering areas inhabited by Sumi, Lotha, Ao, Phom, and Konyak tribes.

The committee had also appealed to to all the armed political groups not to levy any tax and requested the PWD R&B not to deduct any “extraordinary” amount from the fund. A source also informed this correspondent that the Foothill Road is being executed by three agencies, Nagaland government, PWD, and the NFHRCC. The  earth cutting was completed in 2015 with an initial funding under the “Special Plan Assistance (SPA)” but unfortunately, it was discontinued because of changes in the planning commission and subsequently the pattern of the funding was stopped under the SPA. This had slowed down the process of the project resulting in delay. However, the ultimate goal of the foothill road project and the government of Nagaland was to complete the “Trans-Express Highway”.

After the completion of the earth cutting and handing over the “No Objection Cetificate” to the government, the Nagaland state government had submitted its DPR to the union ministry concerned in 2018 but till date there is no reply from the government of India. The NFHRCC has suggested to the Nagaland state government that while waiting for the completion of the “mega project”, a “motorable road” could be arranged  as an alternatives route instead of passing via the state of Assam. 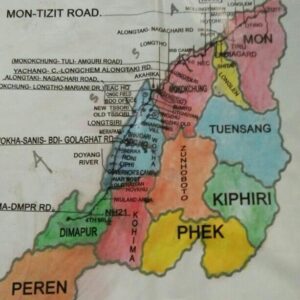 It was known that after persuading for many years, the government had sanctioned an amount of Rs 30 Crores-Rs 20 crores for motorable road project while the remaining Rs 10 crores for the Doyang bridge of which the latter was now near completion. It is hopeful that the motorable road could be completed by the 2nd week of January 2023.
The bridge was to be inaugurated on Wednesday by Nagaland chief minister Neiphiu Rio. However, it was deferred due to other engagements of the chief minister. The final date of inauguration is awaited from the CMO’s office.
It is to be noted that Nagaland Foothills Road Co-ordination Committee NFHRCC on October 21, 2019, had also written a letter to the Prime Minister of India Narendra Modi, through the governor of Nagaland, for declaration of “Trans Nagaland Highway (Foothill Road)” as National Highway.
In the letter, it was reminded that the people of Nagaland in general and the Nagaland Foothills Road Coordination Committee (NFHRCC) wanted to expedite the project so that its completion could coincide with the 50th year of Nagaland’s statehood. The two main characters of the project was also highlighted  — No compensations was sought by the land owners, and no taxation by any armed Naga political groups or by any local authorities.

Laryngeal Protuberance: Of Adam’s Apple and the forbidden…