By The Frontier Manipur On Jan 6, 2023
Priyakanta Laishram
0
Share

Laishram leaves no stone unturned when it comes to highlighting untouched social issues which are either considered “taboo” or “shameful”.

Priyakanta Laishram started making films at the age of 9 by using a mobile phone. He released his first children short film “Lammuknarure” in 2007 when he was 11 years old. It was followed by another two children films, “Achumbadi Amarni” and “Chan-Thoibi”. All these movies were made by using  Nokia N70 mobile phone and Sony Cybershot camera. He was awarded “Youngest Filmmaker 2009” by CNN Mobiles. Asian News International cited him as “Manipur’s Rising Star” and he went on to feature on Reuters as “One Of The Youngest Filmmakers Of India”.

Best known today for his socially relevant and critically acclaimed films like The Foul Truth, It’s Not My Choice, I am Special, Who Said Boys Can’t Wear Make Up, Spaced Out – Panthung Di Kadaaida! and Oneness, he goes all out in laying bare the triumphs and tribulations of the LGBTQI+ community and other minorities.

Laishram leaves no stone unturned when it comes to highlighting untouched social issues which are either considered “taboo” or “shameful”. Breaking several barriers with his mere perspective and changing the queer narrative with his thought-provoking scripts, he is one of the hidden gems of Manipuri Cinema.

Ananya Birla –To Perform in Imphal

His films had been screened at various national and international film festivals and bagged numerous awards for every film. He takes time in making a film giving it time to develop fully as he makes films based on the numerous striking incidents he encounters. 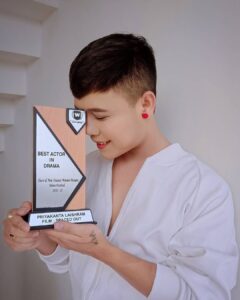 “I will never compromise on my creative integrity or what I want to achieve in life. All I want is to do things I believe in and to create something meaningful over a period of time. With the kind of films I do, it’s not going to make me an overnight star. One thing is pretty sure, each and every film of mine has their own self life and they live on. And that matters the most! I think eventually, 7-8 years from now, people will see and understand what I am trying to do, I hope they will look at my filmography and say, ‘Wow! He only did movies that he believed and he’s gotten better and better.‘ If I can achieve that and inspire others, that would be my greatest achievement. I will put lineage on the line with every movie that I do.” said Priyakanta.

Being the first filmmaker from North East India to make a film on gender neutral fashion – “Who Said Boys Can’t Wear Make Up” (2018) and the first Manipuri filmmaker to make Manipur’s first gay-themed movie – “ONENESS” (2022), Priyakanta Laishram has cemented his place at the vanguard of the queer cinema movement. The voices in most of his films represent this generation’s tenacity, curiosity, empathy, optimism and hope, redefining and representing the world through a prism of fluidity.

“As far as criticisms are concerned, I take in what I have to. Even when a negative criticism comes my way, if it will help in improving myself then I take in with open arms but ignore as much as possible the unnecessary ones. Criticism is good in a way to improve myself in every way. However, I detest unnecessary criticism.” Laishram concluded.

Manipur: 50 glorious years of NS Films to be observed

RTI is a tool to fight corruption, make good use of it: MIC