Winners of Miss Shirui Lily 2022 Finally Get Their Title Prizes

Reaching out to some of the title holders, they have confirmed that indeed they have received their amount from the organiser. Some have even shared their confirmation in their social media posts.

After much hullabaloo in social media about the non payment of title prizes for Miss Shirui Lily 2022 contest, the organiser have finally paid the amount to the respective title holders.

In a press release, 7 Sisters Foundation, the organiser of Miss Shirui Lily 2022 stated,  “In view of the various rumours and speculations being raised in different media houses and social media about the Miss Shirui Lily 2022, we are constrained to issue this press statement that the prizes of the title winners have been paid. We also like to apologize for the delayed in distributing the prizes.”

“After the 2022 Manipur general assembly, with the changes of new legislatures there were series of controversies as to which organization the pageant was to be awarded which delayed a good amount of time and the tender was open on 18th of May 2022. The pageant was announced at the last minute after a prolonged consultation with the committee and Shirui Village for the change of name from the erstwhile Miss Spring as the new pageant name relates more appropriate to the festival. 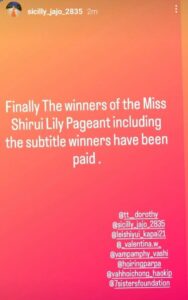 “Though the time was very limited, we (organizer) managed to pull in several partners and sponsors on board which is a first of its kind to offer perks and vouchers that would support the title winners in their professional career and industry. Mention may be made that Sicilly Jajo, Vahoichong Haokip, Levin Luithui are scouted by R&T Aviation Institution for Cabin Crew training for fees worth one lakh and fifty
thousand. Mona Wangkhem has been booked by Delhi based Wings Modelling agency. To top it all, winner of the pageant gets a wild card entry to Rubaru Miss India Elite pageant. 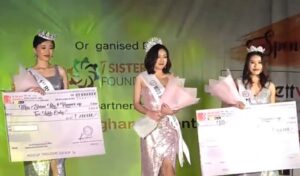 “Manipur tourism has released all the payment quoted in the tender and they are never to be blamed for all the adversaries faced by the organizers in awarding the title prizes. We thank all the the contestants, title winners, make up artist, hair stylist, companies and dignitaries who have supported us through their talent, skills and sponsorship without which this won’t have been possible. We also assured to take care of all the issues pertaining to this pageant if any arises and it is our complete responsibility in all aspect. We’d also like to urge any person or contestants to please get in touch with us at the phone numbers provided before taking the matter to social media or any media so we could support each other and resolve any issues within us” stated the release.

This correspondent while speaking to some of the title holders confirmed that indeed they have received their amount from the organiser. Some have even shared their confirmation in their social media statuses.