Around 150 students of Eastern Shine School and Gateway International School in Moreh Ward No. 7 and volunteers of KLEPCO took part in the drive. They cleaned up riverbeds of the Khujailok river and Lailok river running through the Tengnoupal district.

Extending its gratitude to students, teachers and principal/headmaster of the two schools, and those who have supported the drive, KLEPCO Moreh said it’s the responsibility of the people residing along the two riversides to keep the two rivers clean. The 18-day long football tournament was participated by Moreh UNIT I to XIII.

Speaking on the occasion, Letpao Haokip lauded the good work of MYC Moreh for organising these Sports Tournament-2022 in Moreh, which is inhabited by different communities. “Moreh is infamous as the gateway of drugs. Through these types of sports activities, our youth will be free from Drugs and alcohol. Sports is the best means to get us united. We must guide our youth for a better life, peace and development in Moreh. He said, ” let’s hope and pledge that we will live together as Indians,” he said.

He announced that an international standard school and a hospital will come up in Moreh Town in near future. 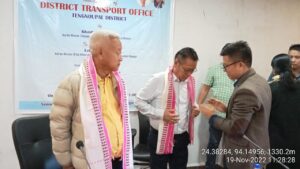 He urged people to extend cooperation to officials of the new transport office for the smooth running of the department. He also suggested DLOs sit together once a month to improve the inter-department relationship.

The transport minister further said the opening of the DTO office in Tengnoupal by the State government will benefit the people and enhance the state’s revenue.

He promised to earmark funds for the construction of a DTC office in Tengnoupal in the coming financial year.