UNTABA is also perturbed by the indifferent attitude of the successive governments of Nagaland for failing to address the issue of oil extraction in Naga areas falling under “disputed area belt” (DAB) and beyond and says that if the ‘Indo-Naga’ issue is solved without addressing these histroical facts, it would never be considered “acceptable and honourable”

United Naga Tribes Association on Border Areas (UNTABA) has appealed to the minister in-charge of border affairs Assam, Atul Borah, to consider withdrawing the “civil suit no.2 of 1988” filed by the government of Assam under AGP government against the Chief Election Commission of India, ministry of home affairs, and the government of Nagaland in which the minister had admitted that the case would be “hindrance” in solving the inter-sate border issue.

UNTABA chairman, Hukavi T Yeputhomi, and general secretary, Imsumongba Pongen, on Wednesday, stated that the Central Nagaland Tribes Council (CNTC) had raised a pertinent issue on the recent reports of resumption of oil extraction in the Naga areas falling under the “disputed area belt” (DAB) and beyond.

UNTABA pointed out that for many decades the Nagas have lost their “underground resources” and their virgin forest products and claimed that the government of India and the government of Assam have all been undertaking “inconceivable strategies” to control the approximate 4,974.16 Square Miles or an equivalent 12, 883.07 square kilometers that rightfully belonged to the Nagas ever since they occupied these lands.

Though it cannot be exactly figured out how many “millions and billions” worth resources have been extracted from the Naga soil through the petroleum and forest products, UNTABA claimed that the Digboi Refinery was established on Naga soil and so was the Numaligarh refinery recently.

To seriously consider legal course of action in order to find the right historical fact(s), UNTABA said it was “very disheartening” to learn the indifferent attitude of the successive governments of Nagaland for all these years in failing to address the issue in the right perspective.

UNTABA mentioned the chairman and his team met the Assam cabinet minister Atul Borah, who is also the in-charge of border affairs, Assam, on January 26 this year in Jorhat, Assam, and had extended appreciation to the chief ministers of Assam and Nagaland on their meet on January 24 where both agreed to solve the “interstate boundary” between Assam and Nagaland “outside the court”. 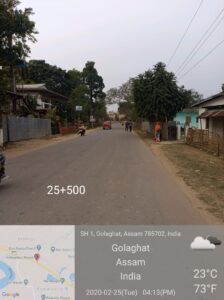 Appealing to the minister in considering the withdrawal of “civil suit No 2 of 1988” filed by the government of Assam under AGP government against the Chief Election Commission of India, ministry of home affairs, and the government of Nagaland, UNBATA said it now appears that the “agreement” between the two chief ministers on January 24 in Guwahati was just a “political gimmick” focusing on “Indo-Naga” political discussions while completely side-lining the rights of the Naga people over its lands.

Lauding the decision of the Central Nagaland Tribes Council (CNTC) for coming out strongly against oil exploration and extraction in Nagaland, UNTABA insisted on having clear historical demarcations of the land of the Nagas so that the Naga people could get appropriate compensation on the “exploitations” of natural resources that rightfully belonged to the Naga people.

UNTABA also claimed that the boundary between Nagaland and Assam starting from Golaghat to Tizit till the tri-junction of Assam, Nagaland, and Arunachal Pradesh is marked by “Dodhar Ali” road. This road extends from “Golaghat town to Barak river” bordering Manipur and was well defined in the 1875 notification of British-India government.

UNTABA further stated that until and unless these historical facts are considered, it was the bounden duty of the government of the day to explore all the available means to see that the Naga people should not be deprived of its rights over “royalty” on petroleum products, natural gases and forest products. The organisation asserted that if Indo-Naga” political solution “comes without considering these historical facts could never be acceptable and honourable”.