By The Frontier Manipur Last updated Jan 16, 2023
AKM executive members at a detailing meeting for the conference
0
Share

The theme of the conference is centred on acquiring knowledge that would enable students to become productive citizens.

Nagaland chief minister Neiphiu Rio, will grace the inaugural programme of the three-day 69th conference of the Ao Kaketshir Telongjem (AKM) on January 18 at the host village, Akhoya, as special guest.

The conference to be held from January 18 to 20 on the theme “Education in Praxis”, the three days meet or the conference held every three years would witness many prominent political leaders as well as intellectuals of the state as speakers.

According to the organizers, the inaugural guest on January 18 will be Nagaland’s Housing & Mechanical minister, Tongpang Ozukum, with government of Nagaland’s Advisor to Industries and Commerce, Imnatiba, and deputy commissioner, Mokokchung, Shashank Pratap Singh, would exhort the gatherings at the inaugural programme of the AKM conference. Workshop on the theme “Education in Praxis” will be held on the 2nd day of the conference (January 19) with speakers- Nagaland’s Power Department Engineer in-chief, Moa, and engineer and & Technology Entrepreneur founder-Tabernacle- The Go-to-Software for Churches.

NLA speaker, Sharingain Longkumer, and Rural Development (GoN), Metsubo Jamir, are also in the lists as special invitees, while minister, Higher Education and Tribal Affairs, Nagaland, Temjen Imna Along Longkumer, will be the valedictory guest.

Meanwhile, the AKM has said that the theme abstract of the conference is that when a student progresses from one level to a higher one through different educational institutions, the knowledge that is acquired should enable him or her to become a productive citizen. 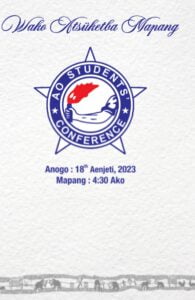 Stating that simply by obtaining a “certificate” that endows one with a degree should be the end of the result; rather a student should be able to contribute, in various different ways to towards the community to which he or she belongs to, the abstract of the AKM has also mentioned that student’s life should not be wasted but rather it should be seriously considered as the “window” to a future whereby the needs of the people and the society are met through “one’s achievement”.

“The challenge laid before the students is whether they can achieve the kind of education that will enable them to be relevant in terms of intellect, skills and attitude, in future”, mentioned the abstract of the AKM.

‘For the Lost, the Last and the Least’: The story of…