“So far, no action has been initiated and no intimation been sent about the action taken. This is a clear indication that the present government is directly encouraging corruption and falsehood”, says PANDM

Peoples’ Action for National Democratic Movement (PANDM) has accused the government of Manipur of “directly encouraging corruption and falsehood” in connection with its plea to remove the incumbent Chief Engineer of Engineering Wing of Education (S) Department as the engineer is deemed “ineligible” for the same post he holds.

In a press statement issued by its Secretary IPR, Rosnikanta Takhelcha, PANDM reminded that on June 23, it had submitted a memorandum to the Chief Minister, Education Minister and other related authorities urging them to remove the incumbent Chief Engineer of Engineering Wing of Education (S) Department.

PANDM observed that the State Government which had taken a strong pledge against corruption seems to remain indifferent to the genuine complaint. “So far, no action has been initiated and no intimation been sent about the action taken. This is a clear indication that the present government is directly encouraging corruption and falsehood”.

According to the organization, the memorandum has pointed out that the incumbent Chief Engineer of Engineering Wing of Education (S) Department “holds a Diploma in Civil Engineering” and “is not even eligible to be a Superintending Engineer (SE)”. PANDM said that he was appointed as the Chief Engineer on deputation.

(READ MEMORANDUM ON THIS LINK MEMO)

While stating that if anyone could whimsically modify the Service Rule to suit one’s interest, PANDM asked, “if an unqualified person can be arbitrarily appointed to a post through corrupt practice and favoritism, can a mere matriculate be appointed an IAS officer?” “We have already submitted all the necessary documentary evidences. We only asked the government to conduct a verification and counter check. The fact that the government has not taken up any action for the last 20 days proves that the government is patronizing corruption and favoritism”, alleged PANDM. 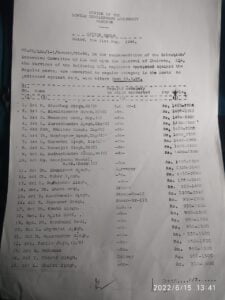 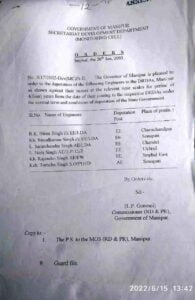 It may be mentioned that PANDM had on July 12, submitted a reminder to the Chief Minister and other authorities and a demand was also made to provide an Action Taken Report at the earliest. It is pertinent to mention the engineer “through many people tried to appease PANDM with an intention to strike a deal to cover up the scandal”. 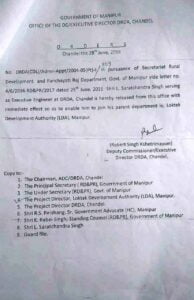 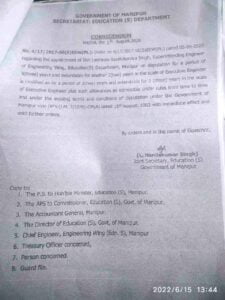 “Someone who claimed to be a Stenographer in the Chief Minister Secretariat contacted the President of PANDM requesting him to save the Chief Engineer. He even claimed that the Chief Engineer had completed graduation in Engineering through correspondent mode”, alleged the press release. 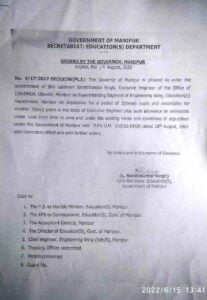 PANDM has alleged that this has clearly demonstrated that the certificate which the Chief Engineer claimed to possess “does not exist”. Although the government is highly vociferous against corruption and drug, but till date no officer has been arrested on corruption charges. “On the contrary, the government would threaten to arrest those who raised question. There is a need to sync words and deeds on the part of the government. People’s faith in the government will be increased if the government takes action without any favoritism”, rued PANDM.

The organization further alleged that there are many cases of appointing people who had retired on superannuation as head of department and head of office by extending their services. “Such a trend should not be encouraged. Such practices not only deprived those staff in the line of promotion of their opportunity to become head of department but are also in contravention of the service rules”, said the press release.

On the current case being pursued by PANDM on public interest, a memorandum along with all the relevant documents relating to service records of the engineer has been submitted to the authorities. As stated earlier, the engineer “was appointed as Section Officer (SO) in the Loktak Development Authority (LDA) on work charge basis in 1996. In 1998, his service was regularized. Next year itself in 1999, he was promoted to Assistant Engineer (AE). In 2003, he was sent on deputation to DRDA Chandel as Executive Engineer (EE) supposedly for 4 years. He stayed there for 13 years by seeking extension through manipulation. As a result, his subordinate staff filed a series of cases against him. In 2016, with the intervention of the Supreme Court, an order was issued for his return to his parent department. However, staff at the LDA claimed that there is no record of the engineer’s return to the LDA”.

While alleging that the engineer’s service has been marked by serious anomalies, PANDM said that after 4 years, the former Joint Secretary (Education) and the present Director of Education (S) issued an order on August 5, 2020, for deputation of the engineers in question as Superintending Engineer (SE) in charge of Engineering Wing Education (S).

“There are a number of instances of corrupt practices prevalent in the Education Department. All the pleas to initiate necessary actions to rectify such irregularities have felt on deaf ears. It is the fervent appeal of PANDM to the State Government to provide an Action Taken Report on the matter at the earliest”, said the press release.

What are friends for?