Despite anticipatory bail order, ATSUM leader Henkhokai Singsit was arrested for a facebook post. He was booked under various non-bailable sections of IPC. However, he was released the next day without producing before a concerned magistrate.

Henkhokai Singsit, 37, S/o. Khupsei Singsit was arrested for his post under his Facebook profile name “Kakai Singsit” allegedly daring Barish Sharma to come to Koubru and threatening him to “wrong his neck”.

According to FIR a copy of which is with TFM, Henkhokai Singsit was booked under non-bailable Sections of IPC 153-A, 505(b)(2), 506 and 34 IPC for criminal intimidation, promoting enmity between different groups on grounds, statements conducing to public mischief with intent to cause or which is likely to cause fear or alarm to the public, statements creating or promoting enmity, hatred or ill-will between classes with common intention. 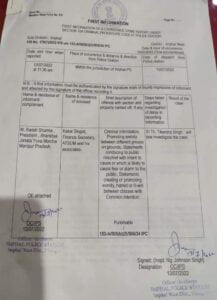 However, to the utter surprise TFM was informed that he was reported to have been released without producing before the concerned magistrate. Many wondered under what circumstances, a person arrested by issuing an arrest warrant, a copy of which is with TFM, for alleged non-bailable offences was released without producing him before the concerned magistrate. Questions are raised whether police stations in Manipur are acting as mediation centres and conducting kangaroo courts instead of following due process of law while arresting a person.

According to legal experts, such an incident is not new in Manipur though it is a glaring misuse of law by police. In its judgement, the Supreme Court of India in the case of M/s Neeharika Infrastructure Pvt. Ltd. Versus State of Maharashtra and others [CRIMINAL APPEAL NO. 330 OF 2021] by Justice D.Y. Chandrachud and Justice MR Shah barred the courts from usurping the jurisdiction of the police, since the two organs of the State operate in two specific spheres of activities and one ought not to tread over the other sphere.

While the rule of the law is very clear on whether the police officer has the discretion to release the person arrested for non-bailable offences, people in power are misusing government machinery and police forces to settle personal scores, they alleged.

The arrest and release of one Paominthang Haokip and release of five arrested leaders of All-Tribal Student’s Union Manipur (ATSUM) following an agreement signed between the government and three tribal students’ bodies are the recent examples, they said.

The police informed the duty magistrate, through the prosecution, for producing Paominthang Haokip and seeking five-day police custody. Chief judicial magistrate (CJM) Janggoulen Haokip waited for the arrested to be produced before him, but didn’t show up, they said. Later it is learnt that arrested Paominthang was freed by the police without following the due process of law, they added.

Again, in the case of five ATSUM leaders, who were arrested on August 2 under various sections of IPC including non-bailable sections of 505(1)(b), 506 and 307, as per newspapers reports, they were released following an agreement between the government and agitating students’ bodies. The IO of the case submitted the closure report on ground of insufficiency of evidence and the court accepted the closure report. The incident clearly demonstrates how the government, its machineries and police force manoeuvre law and judiciary system, they argued.