Beneficiaries/applicants of government schemes opined that the Axis Bank’s episode is just the tip of the iceberg. If an independent investigation is conducted by a central investigating agency, the actual magnitude of the scam in subsidy schemes of the central government will surpass Rs 1,000 core, they claimed.

A Prime Minister’s Employment Generation Programme (PMEGP)’s subsidy scam involving Rs Rs 18.68 crore came to light in Axis Bank Ltd Kwakeithel Branch in Manipur, leading to the arrest of bank employees. The large-scale fraud was detected during inspection by the Bank’s operation team on May 27, 2022 into the Financial Management Report (FMR).

The Frontier Manipur Team interacted with some of the beneficiaries of the PMEGP in Manipur and young entrepreneurs, who are running their ventures successfully to understand how central-sponsored subsidy programmes are being implemented in the state. They opined that the Axis Bank’s episode is just the tip of the iceberg. If an independent investigation is conducted by a central investigating agency, the actual magnitude of the scam in subsidy schemes of the central government will surpass Rs 1,000 core, they claimed.

The PMEGP is a credit-linked subsidy scheme launched by the Union Ministry of Micro, Small & Medium Enterprises to generate employment opportunities in both rural and urban areas. Under the scheme, the Government offers subsidies of up to 35% of the total project cost. The project cost covered is up to Rs. 20 lakh for service units and Rs. 50 lakh for manufacturing units.

The Manager of Axis Bank Kwakeithel branch, Hom Bahadur Basnet (32) s/o Nar Bahadur Basnet of Nongphou Nepali Village in Kangpokpi and Assistant Manager of the branch Kiranjit Wangkheirakpam (32) s/o W Modhuchandra of Nongmeibung Academy Road, Imphal East, who were arrested on December 18, 2022, would be the scapegoats in the whole scandal, they claimed.

How was the large-scale fraud uncovered?

The police remand prayer to an Imphal West court for the accused reveals that the large-scale fraud was uncovered during an inspection by Axis Bank’s operation team on May 27, 2022 into FMR after Multiple high-value subsidy amounts were being credited to the internal office account of the branch from the Government department in a suspicious manner in the FMR on February 26, 2020.

Out of the 269 entries, three saving bank account customers had received subsidy two times. It was also observed that no underlying loans were sanctioned/opened by the Branch in respect of the subsidy amounts received and no subsidy-related documents were found uploaded in the Government Portals.

However, the said subsidy amounts were still found to be released by the Government Department to the suspected applicants. Further, the subsidy claimed application forms have saving bank account (instead of loan account) with incomplete account details, which were duly signed by the branch officials and were uploaded on the portal by the Kwakethel branch to avail subsidy amounts, on behalf of the applicants. The statement of the underlying loan accounts as needed under the Government-Sponsored schemes, were not uploaded as the actual loan accounts under the schemes were not opened at all.

Further, the subsidy amounts credited to these 266 individuals saving bank accounts were again transferred to various customers within the bank as well as to other bank accounts. A Lien (a right to keep possession of property belonging to another person until a debt owed by that person is discharged) has been marked in the 266 applicants’ saving accounts as well as on term deposit accounts linked to these applicants to the tune of subsidy amount credited in the accounts. Aggregate balances of Rs 19.76 lakhs were available in these applicants’ accounts. 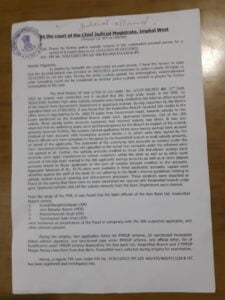 Lapses were identified against the staff of the bank for not adhering to the Bank’s internal guidelines relating to subsidy-related account opening and disbursement processes. (These incidents were classified as Fraud on the points that there were no loans sanctioned nor opened with the Kwakeithel branch under PMEGP schemes (i.e. govt Sponsored scheme) and still the subsidy amounts were claimed from the Government Department.

The report of the bank’s operation team named four bank employees, including the two arrested accused, as perpetrators of the fraud in conspiracy with the 266 suspected applicants, and other unknown persons. Two other bank employees named in the report are Khoirom Sanjosh (DM) and Yumkhaibam Sabir Khan (AM).

The police further said, during the interrogation, the accused admitted that they had used the PMEGP portal by manipulating the portal. That the data of the beneficiaries and applicants were checked by them and instead of sending them to the central/head office of the bank for approval for loans, they uploaded the margin money claim form to the PMEGP portal for claiming subsidy amount.

As the transaction statement shows the number of accounts involved in the transaction is 266, it will take some more time to investigate the role of the 266 account holders and their relation with the accused persons. Moreover, more documents are needed to be seized in connection with the case to dig out more facts and evidence to substantiate the crime committed by the accused persons, said the IO of the case, Addl SP (L&O) Imphal West N Netrajit Singh, MPS.

Central schemes beyond the reach of unemployed youths in Manipur

Speaking to TFM, a beneficiary, who is successfully running a handloom and handicraft store in Imphal, said on the condition of anonymity that she had applied for a project under PMEGP through the district industry centre in Porompat. “I was elated when my project got shortlisted for subsidy benefit under PMEGP for a loan of Rs 22 lakh under PMEGP. However, my happiness was short-lived, no bank was ready to provide me with a loan to avail the subsidy benefit,” she said.

As a last resort, she then approached officials in DIC and shared her plight. They suggested a little-known bank near the DIC in Porompat. When she met officials of the bank, they told her that they cannot provide the loan but can assure her to get the subsidy amount. She requested them to provide the loan as the subsidy amount was too little to start her business and promised to clear EMI regularly, but in vain.

After running from pillar to post for over six months, she finally succumbed to the only offer she had in hand from the North East Small Finance Bank.

What came as a big shock is that the bank gave her just Rs 3 lakh in two instalments from the subsidy amount of over Rs 7 lakh, she said. After giving her Rs 3 lakh, the bank asked her to close all her accounts in it. When TFM asked her how she managed to launch her venture with that little money, she said her husband took a personal loan from his bank and invested in her venture.

Banks must be held responsible for the scam. Had they conducted little scrutiny to find out genuine applicants and sanctioned their loans, many Manipuri unemployed youths might have availed all the benefits of central government schemes and such fraud might not have occurred, she said.

Airing similar views, an entrepreneur, who did not pursue further after public sector banks declined her to give loan under PMEGP despite the approval of her project, said such benefits from the government are not meant for persons like her. “I had applied for a project cost of Rs 10 lakh. It got approval for a loan under PMEGP. After banks refused to entertain my loan application. I shelved my plan and decided to begin small with the little savings I had. Finally, I am reaping the benefit of my hard work.”