By The Frontier Manipur Last updated May 5, 2022
High Court of Manipur
0
Share

These petitions challenged the election of respondent MLAs on grounds of improper acceptance of nomination papers, furnishing wrong information, false statements and non-disclosure of their assets, etc

In a communique to the Joint Chief Electoral Officer (JCEO-II), Manipur, Yumkham Rother, the registrar (judl) of the High Court of Manipur on Wednesday informed that the details were provided as per a letter from the JCEO.

Yumkham Rother however said that with regard to the request “to permit those EVM/VVPATs of ACs of EPs where the machines/counting of votes is not the subject matter, to be taken out of the strong room, the Registry of the High Court has no authority to give the same”.

It may be noted the petitions were filed under Section 80, 80-A, 81 and 84 read with Section 100(1) (d) (i) (iv) and Section 101 of the Representation of the People’s Act 1951 challenging the election of the respondent MLAs from their respective Assembly Constituencies as Members of the 12th Manipur Legislative Assembly on the ground of improper acceptance of nomination papers, furnishing wrong information, false statements and non-disclosure of their assets, etc.

See the details of the petitions below: 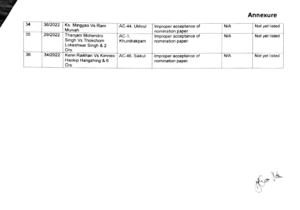 Full details of the communique here: information on election petition