By The Frontier Manipur On Nov 9, 2022
One of the injured in the violence being carried away by the youths
0
Share

Western Sumi Hoho said that IRB personnel present at the site suddenly started firing which resulted in the melee that injured 10 persons.

In the light of the unrest between two villages -Kiyevi and Lamhai Namdi, over land dispute (border) and the violence that broke out  November 7 morning at around 10 am, the Western Sumi Hoho (WSH) has questioned the government of Nagaland “who is responsible for the incident”. WSH said that the responsible side is “neither the Zeliangrong brothers nor the Sumi brothers but the Nagaland government”.

On statements and videos which went viral in the social media platforms in the aftermath of the incident, WSH general secretary, H Kisheto Chishi, on Tuesday said that these portrayed as if the Western Sumi Youth Front (WSYF) had “attacked” the Lamhai Namdi village. He clarified it was not an “attack” but a peaceful protest by “unarmed youths” numbering around 500, who went to the site of the “encroached land”. He said that when the youth argued with a “high ranked officer” stationed at the site for not allowing them to proceed, it was alleged that the IRB personnel present suddenly started firing which resulted in the melee that injured 10 persons.

Chishi also admitted that after the situation worsened, the Sumi youth started burning down the properties in retaliation to the firing. Further, he reiterated that unless the government of Nagaland bring about an amicable settlement to diffuse the situation, Sumi brothers would not compromise on “what they are demanding for”.

Also clarifying on the issue, WSH president Shikaho Zhimomi, rubbished the statement that the villagers of Lamhai Namdi were “attacked” as the Western Sumi Youth Front (WSYF) had earlier given 21 days ultimatum. But without any result and losing “patience” they had to resort to the eviction drive, he said.

Chishi highlighted that since 2019, a status quo between the villages was to be maintained as it was issued by the Nagaland government on June 25, 2019, while eviction order was issued on July 8, 2019, on the alleged “dispute area”.

WSH president Shikaho Zhimomi said that “now it was not about to maintain status quo” but that the villagers (alleged encroachers) were even constructing pucca (concrete) houses including the IRB camp, church building and others. For this reason, the Western Sumi youth lost their patience, he argued.

On the allegations that the Western Sumi youth were armed with sophisticated automatic weapons on the day of the incident, WSH president clarified that the youths, proceeded towards the site “empty handed for a peaceful agitation” and assured that there would not be any violence. He also alleged that on reaching the “disputed area”, the IRB personnel stationed there started firing and in retaliation the “public” also started the violence. “The youth could not control their patience after the escalated situation and burned the properties”, he said.

Also clarifying on the other side’s claim that they (WSYF) were carrying automatic weapons, Shikaho informed that there were many witnesses including the personnel of Assam Rifles and IRB on whether the Sumi youths were carrying any weapon(s) or not. “They are the eye witnesses and if they (Sumi youth) were armed with automatic weapons or not, there would be less injured from their side,” added Shikaho Zhimomi.

Meanwhile, it was mentioned in the June 25, 2019, letter issued by the Home department, Nagaland, endorsed by the then chief secretary, Home, Nagaland, late Temjen Toy, stating that “serious law and order situation” was apprehended after the reported activities for establishing a new settlement by the people of Lamhai Namdi. 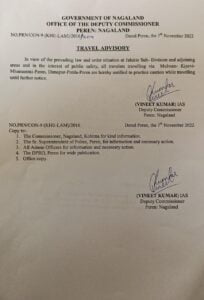 The letter stated that the boundaries between Dimapur and Peren districts are yet to be demarcated and “land dispute” between Lamhai with neighbouring villages was “sub-judice” and therefore, it was ordered that “status-quo” should be maintained by all the parties concerned and no activity whatsoever for any development or constructions should be carried out in the “disputed area” till the cases are settled by the Honourable Courts and land boundaries are demarcated between Dimapur and Peren districts. The letter also mentioned that violation of the order by any individual or groups of individuals, they would be prosecuted as per the provisions of the law.

Following this, on July 8, 2019, another order was issued by the joint commissioner, Nagaland, Vikishe Sema, to the then deputy commissioner, Dimapur, stating that there were reports that some people were still “hanging around” in the disputed area despite an order issued by the Nagaland government for maintaining status quo that was issued on June 25, 2019. The order directed the deputy commissioner, Dimapur, not to allow any person (s) to loiter around in “that” location irrespective of any community for maintaining peace and tranquility and further added that if any people were still present in the “disputed area”, they were to be immediately vacated out of the disputed area. Meanwhile, Section 144 CrPC is still in force in the highway stretch starting from Vihuto village-Khehoyi village-Kiyevi village areas and along the Chumoukedima-Peren border belt and at Lamhai Namdi village and its adjoining areas in “view of the threat to public peace and tranquility”.

Over 100 Agniveer aspirants from Ukhrul district brace for AR recruitment

Living with forests to achieve sustainability