A massive landslide on Wednesday night killed at least eight persons at the Tupul Yard Railway construction camp near Makhuam ( Marangching Part -5), Noney District. 71 persons have been confirmed buried, 18 persons were recovered alive and 08 dead bodies have been retrieved so far while 45 are still reported to be missing.

As per the last information received by TFM, sourced from the team commander in the ongoing rescue and salvage operations, eight bodies have been retrieved while many were recovered alive and others are still reported to be missing. The details include:

Spoke to Manipur CM Shri @NBirenSingh Ji and reviewed the situation due to a tragic landslide. Assured all possible support from the Centre. I pray for the safety of all those affected.

My thoughts are with the bereaved families. May the injured recover soon.

The area is reported to be totally cut-off and blocked with a vast area inundated by the debris and mudslides along the Ijei river. The flow of the Ijei River has also been obstructed by the debris, creating a dam-like storage condition which if breathed will wreak havoc to the low lying areas of Noney District Headquarters.

Meanwhile, chief minister N Biren Singh reached Tupul and assessed the impact of the natural disaster caused by the massive landslides/mudslides at Marangching that washed away the camp of NF Railways construction company (10 Km) away from Noney District Hq. He had an overview of the rescue operation being taken up by the local volunteers/villagers , army/security personals, SDRF, NDRF and other agencies .

Speaking to the media persons on the sidelines of his visit, the chief minister announced that the state govt will provide 5 lakhs each to the families of the deceased and Rs 50,000/- each to the injured persons. Free medical treatment will be provided for those injured.

A statement issued by Manipur Chief Minister’s Secretariat earlier in the day said that the state government has immediately mobilized the National Disaster Response Force (NDRF) and  State Disaster Response Force (SDRF) in dose coordination with Army and Railway Authorities. local staff,iIncluding medical teams. They are all rendering all possible assistance.

Additional medical teams and ambulances have left Imphal already. An Emergency Meeting was convened under chairmanship of the Chief Minister immediately upon receipt of the news of the incident. The situation is being monitored closely and all necessary assistance will be provided. In addition, the MCS officers have been instructed to assist in relief, rescue and coordination.

WATCH VIDEO OF RESCUE OPERATIONS BY SECURITY FORCES AND VILLAGERS: The people living in the downstream along the Ijei river bank fear that once the river water breaks the bund and flows down, all the land and paddy fields including properties will be completely submerged.

Hill Areas Chairman, Manipur Dinganlung Gangmei rushed to spot to oversee the ongoing rescue operation jointly taken up by the volunteers from nearby villages, security personnel, SDRF and NDRF. Army has confirmed the death of two people and said that around 20 persons are still missing. Local villagers said two couples and one child are also missing along with six to seven NF Railway staff members. Rescue operation is on till the filing of this story.

A public advisory issued by Haulianlal Guite, Deputy Commissioner, Noney says “Due to the unfortunate landslide which occurred at Tupul Yard Railway construction camp, where casualties are being reported and dozens buried alive, the flow of the Ijei river has also been obstructed by the debris, creating a dam-like storage condition which if breathed will wreak havoc to the low lying areas of Noney District Head Quarter, and as the condition is still developing and the future is unknown, the general public is hereby advised to take their own precautions, and especially ensure children do not come out near the river. Whoever can evacuate are also advised to evacuate. Public are further advice to stay alert and be prepared for any assistance in case of rain conditions deteriorate further.
Travellers are also advised to avoid travelling along the NH-37 road due to multiple road blockages”. 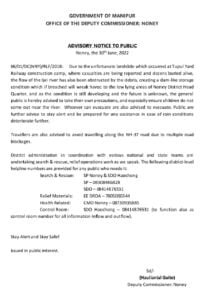 Millions Of Children Will Soon Need Aadhaar IDs To Access Their Right To a Nutritious Meal, says Report by TRC