Slogans for the withdrawal AFSPA reverberated in Ukhrul as over 5000 people participated in a rally held on Thursday at the district headquarters against the alleged ‘forceful occupation’ of land by the Assam Rifles. 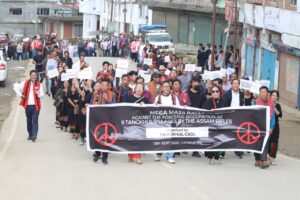 In this regard a memeorandum was submitted to Prime Minister of India through the Chief Minister of Manipur. The memorandum appealed to the Prime Minister for the immediate withdrawal of Assam Rifles the occupied lands belonging to nine Tangkhul villages in Manipur and withdrawal of the Armed Forces (Special Powers) Act, 1958 (AFSPA) from all the Hill Areas/Districts of Manipur. The same memorandum was also forwarded to Francisco Cali Tzay, UN Special Rapporteur on the Rights of Indigenous Peoples and Gam A Shimray, Secretary General, Asia Indigenous Peoples Pact.

The memorandum reads “The Tangkhul Civil Organisations collective, as the representatives of the Tangkhul community in Manipur, wish to place our pressing concerns with faith in your authority and leadership.

“That, beginning in the year 2016, an unwarranted occupation of the land by the Assam Rifles began in Chatric Khunou village. Since then, eight more villages have been occupied as outposts in the same forceful manner in the face of strong objections from the local populace in the following nine (09) villages:
1. Chatric Khunou
2. Ramphoi
3. Kangpat Khullen
4. Tusom CV
5. Poi
6. Mapum
7. Lamlang Gate
8. Khamasom Wallely and
9. Kasom Khullen

“The aforementioned villages have been turned into veritable military garrisons. It is indeed an ungainly sight to find fully armed and combat-ready soldiers moving around in these serene villages, indicating a warlike situation when there is none and conveying the presence of hostilities when there is peace.

“Whereas it may be impressed upon that many generations have been crippled in the Naga homeland under the Indian Armed Forces (Special Power) Act, 1958. And Whereas a relentless effort have been made from every quarters to usher peace and in light of the subsisting Ceasefire Agreement dated 25th July, 1997 and the Indo-Naga Framework Agreement, dated 3rd August 2015, signed between the Government of India and the National Socialist Council of Nagalim (NSCN-IM) and similar such Suspension of Operations being successfully negotiated with other insurgent groups operating within Manipur state, and whereas the Hon’ble Home Minister of India witness whereof has noted that the entire Northeast, “is now witnessing a new era of peace, prosperity and unprecedented development”.

“And whereas as observed by the Jeevan Reddy Committee, the Armed Forces (Special Powers) Act, 1958 (AFSPA) has been a “symbol of oppression, an object of hate and an instrument of discrimination and high-handedness” where the brunt of such draconian laws being always borne by the common citizens of this country and whereas the tribal populace of the Hill Areas/Districts deserve to enjoy the equal rights as guaranteed under the Constitution of India. And whereas owing to forceful occupation by these men in uniform, the people are being subjected to rude disruptions and unwelcome alterations to the way of life in the villages causing grave inconveniences.

“Public spaces such as the playgrounds, schools, children homes and community halls are being used as camps thereby hindering its usual functioning. Private spaces have also not been spared as constructions are being undertaken on private properties with utter disregard for its ownership. Security check posts have been set up and the villagers are subjected to scrutiny as they go about their daily lives. Women and children especially are subjected to the fears caused by this unwarranted situation. The elders who have not recovered from their traumas caused by the military’s atrocities are being subjected to it all over.

“And whereas according to the Ministry of Home Affairs (MHA), the Armed Forces (Special Powers) Act, 1958 (AFSPA) is being withdrawn from 15 police station areas in six valley districts of Manipur; 15 police station areas in seven districts of Nagaland; and 23 districts entirely and one district partially in Assam and whereas the Government of India since the year 2015 had already lifted the Armed Forces (Special Powers) Act, 1958 (AFSPA) entirely from the states of Tripura and Meghalaya and partially from the state of Arunachal Pradesh.

“And whereas at this critical juncture when the Government of India is engaged in hectic peace parley with the Naga people to hammer out a lasting solution to the long pending issue, it is ill-advised and ill-timed to create a fear psychosis among the peace-loving citizens by such mushrooming unsolicited military camps.

“Therefore, with complete faith in the Prime Minister’s goodwill, his undoubted love and sense of duty towards the people, we the undersigned herein, on behalf of the Tangkhul Naga community, hereby obliged to make this crucial appeal for ensuring the following redressal as hereunder:
1. Immediate withdrawal of the forceful Assam Rifles occupations from nine Tangkhul villages in Manipur.
2. Withdrawal of the Armed Forces (Special Powers) Act, 1958 (AFSPA) from all the Hill Areas/Districts of Manipur.

President of United Naga Council (UNC), Kho John stated that “One fine day we will achieve our solution so let us not lose hope. We must be bold enough and be united because we are in talk with the Government of India at the highest level. AFSPA and other draconian laws will be there in our land to subdue us. But we should rise up unitedly. The Second Naga People’s Convention was held at Mokokchung on 21-23 May 1958. When the Naga people was on the path of peace process, the Government of India with an order from Delhi on May 12, 1958 announced for enforcement of AFSPA in Nagaland and North East. While we are talking about peace, the Government of India insisted on enforcement of AFSPA in North East. AFSPA must go.”

President of Naga Women’s Union (NWU), Asha Wungnam on behalf of 20 tribe’s women in Southern Nagalim stated that “September 11, 1958 has been a catastrophic day for the people living in country who is claiming to have the highest democracy in the world. It has been 64 years of brutal discrimination, abuses, oppression, multiple killings and death we have witnessed since the passage of AFSPA. The Naga Women’s Union strongly rebuke against the forceful military occupying of 9 villages in Ukhrul District, Manipur. This forceful establishment of military camps in our homes without our consent is almost like declaring war and a challenges to the innocent citizen. Therefore, the Naga Women’s Union demands the immediate attention of the Chief Minister and Home Minister of the State and ensure such forceful settlement is reviewed for the safety and security of innocent unarmed citizens including women and children. We demand our right to peace and security and an end to violence in our land. We shall continue shouting for our freedom till it is restored rather than waiting for our turn to be the next prey.”

Convenor of Naga People’s Movement for Human Rights (NPMHR), Joyson Mazamo stated that “Indian government began indulging in massive military mobilisation after ceasefire. Evidence of military entrenchment campaign can be seen everywhere in the Nagas land with many make shifts camps gradually replaced with concrete and permanent structures. Despite being fully aware that use of force and militarisation policy to suppress the Nagas does not pay dividend, the Indian government still chooses to pursue the same policy that had martyred many Nagas, destroyed homes, burnt down villages in the past. Each time, our resolve as a people to defend our land and birthright is strengthened. The Armed Forces (Special Powers) Acts of 1958 is a testimony to the fact that India is not a democratic nation as the Act is completely opposite to the rule of law.

“We acknowledge the contribution of many conscientious Indians who have walked the extra mile to join the movement for repealing this dreaded legislation that is being implemented in the name of Indian people.

“To the Indian Military Officers and armed personnel, you know that Naga people are not your enemies, and we do understand that at times, you do not like the consequence of your work. We appeal to you to listen us also, we can make reason together and make better choices.

“To the Prime Minister, Home Minister and all who matter, if military solution is the ultimate choice as evident by the ongoing warlike preparation in the 9 villages for the Indian Government, the ceasefire agreement signed between GOI and the NSCN is meaningless. We, the Naga people, have made our choices, that is to live in peace and dignity. The hallmark of every human being.

“Let it be known that the present of military personnel even without resorting to violent acts is still human rights violation.”

The rally started at two points North and South Ukhrul and converged at Ava Market. In connection with the mass rally organised today, Deputy Commissioner of Ukhrul issued an order, detailing SDO of Ukhrul, M. Suranjoy Singh as the Executive Magistrate on duty. The rally ended peacefully and there was no report of untoward incident. The public showed their support by coming out in large number for the rally, shops were closed and no vehicle was plying during the rally.

Engineer’s Day greetings to everyone with inherent engineering mind

Socio-Politico Scenario of Manipur: Calculus is not the end

TKS questions altering of specification for construction of…

High drama as GMT founder, 3 others sent to jail for running…