This is the second visit by Thai officials in recent times. On September 22, a 13-member delegation, including four officials from the Royal Thai Embassy in New Delhi, also visited ICP Moreh and met all the stakeholders at ICP Moreh

Officials from the Thailand Embassy and the University of MAHIDOL, Bangkok have visited the Integrated Check Post (ICP), which is situated at the India-Myanmar Border Town, Moreh under the Land Port Authority of India.

It may be noted that on September 22, a 13-member delegation, comprising four officials from the Royal Thai Embassy in New Delhi, three officials from the Ministry of Foreign Affairs of Thailand, and six delegates from six different chambers of commerce also visited ICP Moreh and met all the stakeholders at ICP Moreh.

The main purpose of their visit to the India-Myanmar border town is to explore the economic potential for investment.

The manager of the ICP Moreh T Baite accorded a warm welcome and presented a traditional shawl to Saithong Soiphet, Minister Counsellor (Commercial). 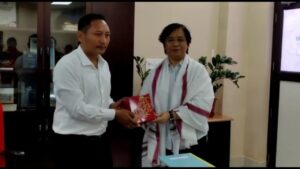 Minister Counsellor S Soiphet informed that there’s no hurdle or obstruction in the Thai-Myanmar border trade.

“Trade is being carried out regularly and commodities are flowing as usual in our border,” said Soiphet.

Thailand is Myanmar’s second-largest trading partner after China, with border trade at five checkpoints – Tachileik, Myawady, Kawthoung, Myeik and Hteekhee – amounting to $4.3 billion in fiscal 2020-2021, up from $3.9 billion the year before.