Following the sudden resignation of Raitu Chawang from chairman post due to ill health, new office bearers were appointed at an emergency Dimki Session attended by all the cabinet members, senior members and high-ranking officers of the front, said a statement

Zeliangrong United Front (ZUF) has got new office bearers. S Kamson and ZD Bond Gangmei have been appointed as new chairman and vice chairman. Major reshuffling of the rank and file of the Front was necessitated following the sudden resignation of Raitu Chawang from chairman post due to ill health, said G Nguiba, MIP, ZUF in a statement.

The appointments were made at an emergency Dimki Session attended by all the cabinet members, senior members and high-ranking officers of the front after a deliberation on the agenda of the ZUF at length and on strengthening the Front in order to meet the aspirations of the Zeliangrong people in particular and of the Nagas in general, said the statement. 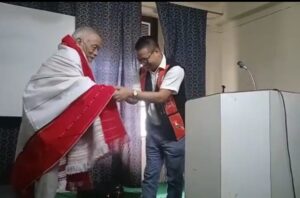 There was a rousing standing ovation after he delivered a powerful farewell speech and was presented a Pheingau (Zeliangrong Men’s Shawl) as a memento of his long and dedicated service to the Zeliangrong people and to the ZUF at its crucial phase five years ago till today by Mr. S. Kamson, the founder member of ZUF and the new Chairman (He was the Chairman until Shri Raitu Chawang took over 5 years ago), it added.

The statement also said S. Kamson and his cabinet were dedicated to the service of the people in the blessing ceremony administered by a renowned Pastor that day.  In his speech, Kamson mentioned how Raitu Chawang had struggled to keep the Zeliangrong movement alive despite his ill health.

He reassured that the common aspirations of the Zeliangrong people will not be compromised under any circumstances and encouraged the cabinet members and officers of the Front to work harder, pray more fervently and work with sincerity so that Zeliangrong people can achieve the dreams of Haipou Jadonang and Rani Gaidinliu.

The new chairman also reiterated that leadership may keep changing with the passage of time but the foundational truth that Zeliangrong/Luangdimai people living in the compact and contiguous areas in the NE states of Assam, Manipur, Nagaland and Mizoram are one people and they need a common homeland or Luangdiram as their own territory to live together and to govern themselves is without doubt, deservingly and unquestionably the greatest desire of the people.

He further stated that Zeliangrong Homeland within the Union India is very much permissible under the purview of the Indian Constitution of India. “With a strong and robust Government at Centre and in the states mentioned above and with good working relationship with the NNPGs, Zeliangrong people must work harder to keep the Zeliangrong Movement in the fast track”. He further appealed to the Civil Organisations of the Zeliangrong people and the public  to work out a workable strategy so that all the stakeholders cooperate and strive to achieve the collective Zeliangrong dream.

The statement further said on the occasion of the 91st Martyrdom Day of Haipou Jadonang, the Zeliangrong United Front paid its deepest homage to the legendary hero and freedom fighter who had laid down his life for the noble cause of his people (Makaam/Zeliangrong/Luangdimai/Naga i.e the indigenous people in the region of Assam_Manipur_Nagaland).

The Front appealled to all Zeliangrong/Makaam/Luangdimai people irrespective of the region, dialect and faith to light up candles at their homes at 6 PM on 29th August 2022 in remembrance of the hero martyred for protecting his land and people so that the children growing up will learn about him and his extreme sacrifice.

On the historic occasion, the ZUF vowed to work dutifully and exert its whole strength towards the realization of the dream of Haipou Jadonang. ZUF further appealed to the Zeliangrong public and CSO leaders to extend every possible help in order to achieve the unfulfilled desires and political aspirations of Haipou Jadonang and Rani Gaidinliu.

In the statement, ZUF cautioned the public against individuals and organisations with honey coated tongues colluding with the enemies. “Those individuals with their intention being, to keep the momentum of Zeliangrong Homeland Movement slow by dividing the people into many pieces and creating confusions shall be marked. Such leaders and organizations should not be given any support by the public because their agenda is to divide and rule, personal position and wealth in the name of working for the people,” it said.

“ZUF will take strong action against those individuals and organisations if they continue to stand in the way of Zeliangrong Homeland and in whatsoever manner try to sabotage the historic and common aspirations of the Zeliangrong people,” it added.

Winners of Miss Shirui Lily 2022 Finally Get Their Title…