Clash broke out between security personnel and the protestors after they were stopped from marching towards the deputy commissioner’s office. Protestors pelted stones at the security forces which responded by firing tear gas shells and opening fire in the air to control the situation, sources said.

A day after the arrest of human rights activist Mark Thangmang Haokip in New Delhi, protests erupted on Wednesday in Churachandpur with protestors in huge numbers taking to the street demanding his release.

Clash broke out between security personnel and the protestors after they were stopped from marching towards the deputy commissioner’s office. Protestors pelted stones at the security forces which responded by firing tear gas shells and opening fire in the air to control the situation, sources said..

Mark T Haokip, who is the president of International Human Rights Association (IHRA) Manipur chapter, was arrested from his residence at Kishangarh, New Delhi around 2.30 pm on Tuesday after he failed to respond to police summon order in connection with an FIR case against him.

Mark T Haokip is facing multiple FIRs for allegedly inciting communal enmity on social media handles. He was summoned in connection with an FIR filed by the Federation of Haomee (FoH), and Kangleipak Kanba Lup (KKL) and the complaint lodged by Inspector N Thangzamuan in July last year.

Meanwhile, a protest rally was also staged against the arrest in Kangpokpi district also. Hundreds of protestors congregated at Brig M Thomas Ground in protest against the arrest and demanded unconditional release of Mark T Haokip, said a source. The protestors also shouted slogans, “Release Dr. Mark Haokip”, and hold placards that read, “Is the Constitution still alive”, “We fight for Justice, not unlawful arrest”, Justice for Dr. Mark”, “Where is Law?”, “Where is equality”, etc, added the source. 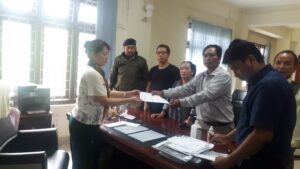 As per the memorandum submitted through the Deputy Commissioner Kangpokpi, COPTRM alleged that the Indian Penal Code IPC 153(A) has gravely been misused by the State Government in the arrest of Mark T Haokip. “The arrest at most is an apparent bias of the Government against the Kukis, implicit in the majoritarian shift of the Manipur government towards a Meitei-centric government,” it claimed.

The memorandum signed by COPTRM Convenor M Haokip alleged that the Federation of Haomee and Kangleipak Kanba Lup were the responsible groups who incited hatred toward minority tribes in the State but were neither summoned nor arrested for instigating hatred and communal animosity in the state. They run their propaganda freely and are guaranteed freedom of speech and expression without limitation while the tribals in Manipur are glued only to listen. This is the case that led to the arrest of Mark T Haokip, it claimed.

In the memorandum, COPTRM maintained that the case against Mark T Haokip is unambiguously a fitting reply with regard to the call of Kukis as Foreigners and Refugees. The statement was made by Mark T Haokip with “valid historical documentation” on Kuki peoples and “their land rights based upon the Manipur Merger Agreement with the Indian Union, by which the then King of Manipur Maharaja Bodha Chandra ceded his territory of 700 sq miles of Imphal Valley”, it said.

“But the rulers of the Hill Chiefs and Headmen never signed any merger agreement with the Indian Union as Maharajah Bodha Chandra did,” it added.

Further, the memorandum said primarily, the arrest, therefore, is an infringement upon the Right to Freedom of Speech and Expression under the constitution of India article 19 (1) (a). “Therefore, we pray to your kind office to acknowledge the unlawful arrest of Mark Thangmang Haokip and advise his immediate release,” it argued

COPTRM urged the governor to “stop all derogatory statements against the Kukis by the non-tribal communities terming Kukis as Foreigner and Refugees as it should be a punishable offence under the Indian Citizenship Act, 1955”.

Clarification made on drugs-related seized vehicle…