Altogether five teams, viz: India A (Indian Polo Association team), India B (Manipur team), Indian Navy, the United Kingdom and the United States of America will vie for the trophy.

The 14th Manipur Polo International tournament which is organized as part of the Sangai Festival 2022 is scheduled to kick off on Tuesday after a gap of two years due to the pandemic and will go on till November 29. 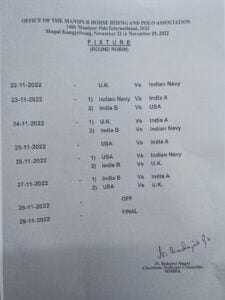 Pradeepkumar, who started riding a horse around the age of 17, made his polo debut in Junior State Level Polo Tournament, 1994, was part of the Khurai Polo Club, winner of the Governor’s Cup in 1996. In 2007, he joined the 5th IRB as a rifleman and that’s the time he left rowing and other sports to concentrate on polo. He has been part of the winning India B team of the Manipur Polo International tournament from 2012 to 2014 after a break of one year is back in 2016 and 2017.

In 2003, Pradeepkumar went as part of the MHRPA team to Kolkata, and was a member of the Manipur team, which won a tournament at Drass in 2012 under very trying conditions. In 2016 defeated the ASC team in Luckhnow even though the team was playing on thoroughbred horses for the first time.

The second senior member of the team P Ojit, 38 years, from Tentha, is the son of a very renowned polo player late P Manaobi who played for the Veterinary team. As with many other polo players Ojit also started riding from a very young age of 5 years and with father Manobi’s training, began playing polo at the age of 15 years. Ojit was also a very keen footballer but his real love has remained polo.

Ojit started off by playing Pana Polo in Wangjing and in 1997, he began playing in state-level polo tournaments with Tentha Polo Club. He was part of the N Hazari tournament wining Tekcham Polo Club in 2002 and 2003. Ojit also went to Drass with the Manipur team to take part in the polo tournament there but unfortunately had to come back because of a landslide.

P Oji has represented the state in every edition of the Manipur Polo International Tournament since 2012 till date.

Laishram Atangba Singh, just 26 years of age made a very impressive debut in the 11th Manipur Polo International scoring as many as eleven goals. Atangba’s elder brother had a horse but he was not allowed to ride it so he took to catching other peoples’ horses and riding them, often after bunking classes when he was around 10 years old.

Th. Kaoba of Chingkheihunba Polo Club was Atangba’s first coach and under his watchful eye started playing polo for the same club. In 2012, he took part in the N Hazari Polo Club and in 2013 he was part of the state team which played exhibition matches at Fort Williams, Kolkata.

In 2016, Atangba joined X Polo Club and in the same year went to luckhnow to play exhibition matches there with the state team. y, Atangba is extremely happy to get a chance to play against such good foreign teams who plays with such a lot of discipline. He gives all the credit to his mother who supported him throughout in his quest to become a polo player.

The fourth member of the Manipur team, Laishram Thomson, 29 years of age is the son of Laishram Rajendra Kumar and Londhoni Devi of Singjamei Cherom Leikai. Thomson started riding at the early age of 9 years and was around 15 years when he started playing polo.

The initial inspiration for taking up the game of polo came from his elder who to this day is an active polo player. Among other coaches and seniors who guided and helped him hone his game, Thomson mentions Oja Naba Singh and Joyshankar Salam of Thangmeiband Polo Club, Ch Ajit of Singjamei and Jotin of Khurai Polo Club.

Thomson has represented Manipur in the 8th and 10th editions of the Manipur Polo International tournament and he is making a comeback of sorts in this 14 edition of this prestigious tournament. Having been in good form this season, Thomson hopes to take advantage of it in days to come give a good display and help the team lift the trophy.

A fresh entrant to the Manipur team is young Laishrim Rohit, just 22 years of age, son of Laishram Romeo and L(O) Mirabai of Thangmeiband Sinam Leikai. Rohit’s tryst with horses began at the young age of five years but began playing polo only at 18 years of age. Though Rohit was also good at football, he deiced to give it up and concentrate solely on polo.

Taking to polo came naturally to Rohit as his father and mentor was an accomplished player with the Imphal riding club. He considers his father as the pillar of support and credits his growth as a polo player to his father.

Though he believed he played good polo this season, he was pleasantly surprised at being selected to represent Manipur in this prestigious tournament. With the encouragement from the seniors, Rohit feels he is getting settled in the team and developing a very good understanding with his teammates.

Soibam Sadananda, the last member of the team, 32 years of age is born to Soibam Yaiskul and S (O) Tombi of Tekcham Manning Leikai. He is the youngest of four siblings, two sons and two daughters.

Sadanada began riding horses at the age of 10 and took up the game of polo shortly afterward. At around 15 years of age, he began representing Tekcham Polo Club in various state-level polo tournaments. He also turned out for Singjamei Polo Club and Ibudhou Marjing Polo club in later years.

Among his mentors, he mentions, Oja Tombi of Wabgai, Oja Doren of Tentha and P. Ojit of Tekcham polo club who continue to guide him to this day.

Though he is representing the state team for the first time, Sadanada revealed that he was confident of getting selected as he was performing well consistently in the tournaments he played this season. He is prepared to face any opponent in this tournament and give his best to help Manipur lift the trophy once again. S Bimol a former captain is the team coach while N Ibungochoubi is the manager.