Manipur police seize consignment of drugs from its commando unit

Kakching Police team on Monday morning seized a huge consignment of illegal drugs from a team of commandos who were posted in Moreh, the international border town between Manipur and Myanmar. The Kakching police seized the consignment of drugs from a Maruty Gypsy used by a team of commando (CDO) unit, Kakching which was posted in Moreh and now under orders of posting to Special CDO Unit, Khabeisoi. The vehicle was coming from Moreh via Kuraopokpi near St Joseph English School on National Highway-102. 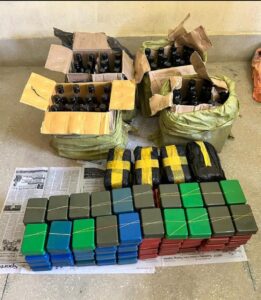 The detained persons along with the vehicle were searched after observing legal formalities. From the vehicle, 100 (hundred) soap cases containing suspected Heroin No.4 powder and  8 bundles of suspected WY tablets with each bundle containing approximately 10,000 tablets. Upon weighing, the suspected Heroin No. 4 powder was found to be 1.336 Kilograms and suspected WY tablets were found to weight 9.151 Kilograms respectively. A cash amount of Rs. 80,000/- (rupees eighty thousand only) was seized from the accused person namely Hav. No 022007251 Kh Achouba Singh.

The arrested police personnel along with the seized articles were handed over to OC, Kakching Police Station for taking up further necessary legal action.

Meanwhile, in a press briefing the Manipur Pradesh Congress Committee (PCC) president K Meghachandra while commenting on the seizure of huge consignment of drugs from the commando unit team by police took on the Manipur government by asking “Is the War on Drugs of BJP government in Manipur a hoax?”

Press briefing by @meghachandra_k, PCC President in front of the SP Office, Kakching Dist. on the seizure of huge amount of Drugs from CDO team, Manipur Police by a special team of CDO, Manipur Police at Pallel Check Post, Kakching.
Is War on Drugs of BJP Govt in Manipur a hoax? pic.twitter.com/JHeiLRi2lF