It has been alleged that the Congress spokesperson during a discussion on Impact TV, April 9 had “not only abused the mainland Indian but also used foul and derogatory language” against the Union Home Minister Amit Shah.

Imphal Police arrested advocate and Congress spokesperson Sanoujam Shyamcharan Singh (Sanou) in the wee hours of Tuesday based on an complaint lodged by Barish Sharma, President,  Bharatiya Janata Yuva Morcha, Manipur. He was taken to Imphal Police station and an FIR had been filed in this regard. Till the filing of this report, Shyamcharan was yet to be produced in any court. 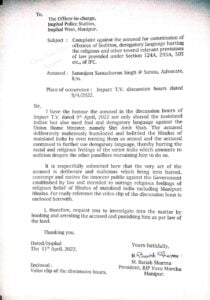 Advocate and member of Manipur Pradesh Congress Committee legal cell Rabi Khan informed TFM that Shyamcharan was picked up by Imphal police past midnight, in the wee hours of Tuesday from his residence. He was taken into police custody but was yet to be produced in any court till around 7.30 pm on Tuesday.

According to the complaint, Sanou, the accused has committed offence under sections 124A (sedition), 295A (deliberate and malicious acts, intended to outrage religious feelings), 505 (public mischief) of the Indian Penal Code. The accused had during a discussion on Impact TV om April 9 “had not only “abused the mainland Indian but also used foul and derogatory language” against the Union Home Minister Amit Shah.

The complainant alleged that the accused “deliberately maliciously humiliated and belittled the Hindus of mainland India by even terming them as animal and the accused continued to further use derogatory language, thereby hurting the racial and religious feelings of the entire India which amounts to sedition despite the other panellists restraining him to do so”.

Killing of endangered Hornbill bird draws flak from many…