“We reject any kind of divisive and repressive policies perpetrated upon the Nagas by the adversaries and its collaborators on the basis of the arbitrary administrative boundaries”, said the declaration adopted by NSCN (I-M)’s Nagaland members

With an agenda of “Reaffirming of One people, One Nation”, more than 7000 Naga “national workers” of the NSCN (I-M) from sixteen regions of Nagaland including both armed and civil members gathered Agri Expo site, Dimapur, for the “Nagaland State National Worker’s Convention”. 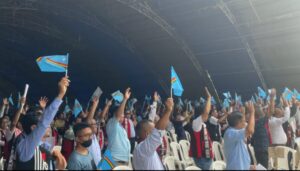 According to MIP, NSCN/GPRN, this coordination meeting of the “Naga national workers” from Nagaland state was necessitated as many divisive elements/groups were “mouth-louding” for Naga solution only for the Nagaland and ready to forego “Naga national flag and constitution” in the name of “Naga solution”.

The MIP stated that this was tantamount to “selling out” the “Naga national identity” as stoutly defended by our forefathers, and significantly, it was against the “national principle” of “one people, one nation” that was laid down by our great Naga freedom fighters.

“In the background of this treacherous turn of development, Naga national workers from Nagaland state were compelled to deliberate on the situation in order to save Naga nation”, said the MIP press note.

NSCN/GPRN Chairman, Q Tuccu, in his address said that “Nagas are one wherever they are, one common goal and one issue” and pointed out for the delay in the protracted Naga solution by stating that the Nagas cannot give away their rights for the sake of Naga solution and never could compromise the Nagas’ rights.

A five-point “solemn declaration” by the “Naga National Workers” from Nagaland state compromising of 16 regions for a “unified Nagalim” was also adopted. The DECLARATION OF AUGUST 26, 2022, at AGRI EXPO, DIMAPUR, NAGALAND

1. We do acknowledge the inalienable political foundation laid down by the founding leaders on the basis of the Naga Plebiscite of 1951, and further reaffirm the principle and commitment of one people one Nation.
2. We reject any kind of divisive and repressive policies perpetrated upon the Nagas by the adversaries and its collaborators on the basis of the arbitrary administrative boundaries.
3. We firmly believe, profess and stand by the Framework Agreement signed on August 3, 2015, for an early honourable and acceptable solution as two sides have already agreed to work out the details on the competencies.
4. Any solution that disregard historical and political rights of the Nagas by repeating the act of another Naga People’s Convention (NPC) and imposing its will upo n us is not acceptable.
5. As necessitated by the situation, the house does reiterate its stand by the decision of the National Assembly held on May 31, 2022, to uphold and protect Naga’s unique history and National principle at any cost under the leadership of chairman, Q Tuccu, vice-chairman, Tongmeth Wangnao, and general secretary, Th Muivah.

Socio-economic offences and granting of bail