The founder, Nongmeikapam Gopal Singh was an ardent advocate of education. He rightly viewed education as the primary way to achieve one’s success in life. For this, he exercised his power and lobbied hard for the opening of many schools and colleges in Manipur

Speaking as the Chief Guest, Y Khemchand Singh lauded Nongmeikapam Gopal Singh for his significant contributions in the field of education and literature. He also played a pivotal role in the establishment of Manipur Sahitya Parishad in 1935, the Minister added.

Y Khemchand also assured to appeal to the authorities concerned and extend the best possible help from his end to add science subjects in the course curriculum of the college as proposed by the former principal of the college.

The Minister stated that Nongmeikapam Gopal College which is affiliated to Manipur University and recognized by University Grant Commissions is an art college in humanitarian and social science. Assuring to extend necessary help to include the science stream in the college, he appealed to the concerned authority to remember him when the situation demands.

Former Deputy CM Y Joykumar also spoke on the occasion. He stated that the N.G. College is one of the most important institutions in the state and urged the students to achieve education for higher knowledge. No development can be brought in a society if there is no proper education, he maintained.

A BRIEF PROFILE OF THE FOUNDER OF N.G. COLLEGE

Nongmeikapam Gopal Singh, an educator and social reformist of the early twentieth century of Manipur was born to Nongmeikapam Durga (Angangmacha) Singh and Chabubngbam Ningol Taru Devi at Pebiya Pandit Leikai, Ningomthongjao, Imphal on May 1, 1884.

His father, N. Durga was employed as Fougei Pannaba of the Maharaj. He also used to do the profession of ‘Lairik Haiba Thiba’ quite successfully. It is the narration of short verses from religious books in Sanskrit and Bengali and translation and explanation of it in Manipuri. At present, this form of Art is almost extinct in Manipur. N. Gopal had one elder sister called Thamjet.

Personally, N. Gopal’s schooling initially was done at Johnstone Primary School and later at Tera LP School. He had studied upto 3rd Standard or Tritiya Shreni as was known then. Studying upto Class Three was a big thing in those days as he was considered to have belonged to the educated elite group of the British period.

He started his career as Petition Writer at Cheirap Court and later he was employed at the same Court as Mohari. And because of his profession, he was popularly known to his friends and relatives as Gopal Mohari. He retired from service during the Second World War.

Nihilism Is Not and Cannot Be the Principle of Governance:…

From early childhood, he was an ardent advocate of education. He rightly viewed education as the primary way to achieve one’s success in life. For this, he exercised his power and lobbied hard for the opening of many schools and colleges in Manipur.

In the late 1960s, in Manipur, initially there were only few colleges. To mention some, they were DM College at Thangmeiband, Imphal College at Kwakeithel, Manipur College at Singjamei , etc.

However, there were no colleges in the Uripok area then. The residents of Uripok, which is located right at the centre of Imphal City, at that time, felt the need of a good College in their area. They approached N. Gopal Singh for establishment of a College in their area. He understood the genuine requirements of the people and wholeheartedly supported the cause.

He, with Yambem Tijendra Singh, Salam Shyamkishore Singh, Konthoujam Tombi Singh and along with some residents of Uripok undertook fund drive for starting City College. The College started initially as day and night College and was co-located at Tombisana High School. The College was shifted to the present location in 1976.

The other passion of N. Gopal Singh is the spread of Library Science to all nooks and corners of Manipur. He used to say “Where there is a school, there should be a Library. It is not a luxury. It is a necessity. Libraries are the building block towards knowledge”. Imphal Public Library was started by him in August 1934 and is now relocated at Sorbon Thingel in a spacious State of the Art building.

Besides these, N.G. College, which was founded under his leadership as a Chairman of the then college Governing Body creates his name and thus today remains as a permanent mark of his selfless hard works and generosity towards society at large.

A BRIEF PROFILE OF N.G. COLLEGE

The N.G. College (Nongmeikapam Gopal College) is ideally situated amidst the greeneries and bountiful beauties of Lamphelpat, near the historic Langol Hills, about one kilometre away in the heart of the Imphal City. The location affords solitude and a congenial atmosphere. The college has a spacious campus of 6.4 acres which provides sufficient areas for building infrastructures, playgrounds, swimming pools besides others.

The N.G. College was an offshoot of a solemn meeting held on May 5, 1969, which gave birth to the erstwhile “City College” in 1970 as a night college at the Tombisana High School, old Assembly Road, Imphal.

On the 26th June of 1972 the then “City College” was rechristened as “Nongmeikapam Gopal College”. The college was converted to a full-fledged Government college on a historic Tuesday, 1st of January, 1980. The college is now affiliated to Manipur University and is recognised by the University Grants Commission (UGC) under 2(f) and 12(B) of the UGC Act, 1956.

Now the N.G. College, Imphal has become a NAAC accredited college with CGPA 2.43 (B-grade). A peer term of 3 members from UGC visited on 8th and 9th of March, 2022 and assessed the status and monitored the desired standards of the college for NAAC qualification and declared qualified by accrediting NAAC on the 15th of March, 2022.

The N.G. College is an Arts college and has most of the subjects in Humanitarian and Social Sciences viz. Economics, Education, English, Geography, History, Manipuri, Mathematics and Political Science. Besides, the college has now opened Vocational Courses too, namely (i) Fashion Designing and (ii) Hospitality Management offered by DDU KAUSHAL Kendra, N.G College and (iii) One Year Diploma Certificate Course in Media and Journalism under RUSA Scheme (iv) B. Voc: IT-ITES & Floriculture under UGC. 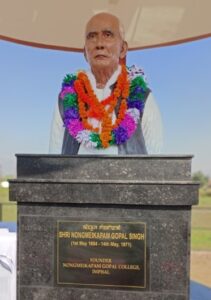 In connection with the celebration, a joint N.G. College Founder’s Statue Installation Committee was constituted with the college Teaching Staff and the Founder’s family. The statue of the college founder, Late Nongmeikapam Gopal Singh was installed in the premises of the college at the meeting point of the western and eastern approach roads (central portion of the campus), occupying an approximate area of 40 ft. x 40 ft.

Looking At 2023 And Beyond With Renewed Hopes

Solution can be inked when Framework Agreement is honoured: NSCN (I-M)