Nationalist BJP and the curious case of Manipur’s Maharaja

Emerging documents puncture the BJP’s political theory of integrating India by aligning itself with forces that the saffron party normally considers hostile to its forward march towards bringing states on the margins within India’s nationalist physical and emotional fold.

Certain documents in TFM’s possession expose an unholy alliance that worked out and which could prove detrimental to furthering the cause of a nationalist party like the BJP with its baggage of being the foremost nationalist political party of India.

These documents seem to puncture the BJP’s political theory of integrating India by aligning itself with forces that the saffron party normally considers inimical and hostile to its forward march towards bringing states on the margins within India’s physical and emotional fold. Much remained unsaid and controversial as these documents were not in the public realm characterized by political pragmatism.

BJP Member of Parliament in Rajya Sabha from Manipur Leishemba Sanajaoba, as Maharaja of Manipur, allegedly signed a declaration of independence of Manipur from India. The team of a few individuals went to London and shared the declaration of the independence signed by the Maharaja in 2019 in a public press conference attended by international media. In a letter dated February 12, 2021 to Union Home Minister Amit Shah by the President and other top office leaders of North East India Development Party, a regional political party, in which N Samarjit Singh was also its former President before he went to London in 2019, it is mentioned that “The Manipur state council was formed by the then His Highness the Maharaja of Manipur, Leishemba Sanajaoba who is at present the Hon’ble Member of Parliament (Rajya Sabha) from Manipur vide orders no. 11 of 2012 dated March 14, 2012. 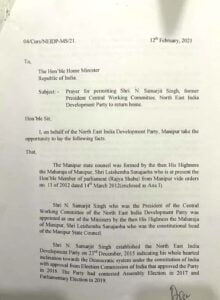 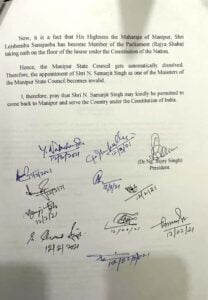 It may be mentioned that on October 29, 2019 a press conference was held in London by Y Biren Singh with N Samarjit Singh. During the conference, he announced the independence of Manipur as His Highness the Maharaja of Manipur had already announced Manipur State Council as the Independent De-Jure Government of Manipur in the year 2012 vide orders no. 11 of 2012 dated March 14, 2012 in exercise of his power conferred on being coronated vide the proclamation made on August, 6 1996. 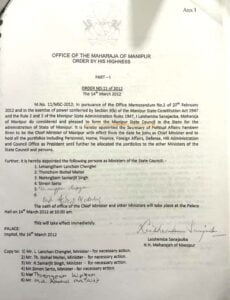 Under the circumstances stated above, whatever happened in London etc. were done under the leadership of the constitutional head, His Highness the Maharaja of Manipur, now the Hon’ble Member of Parliament (Rajya Sabha).”

N Samarjit, who was present at the press conference in London, is now in jail in Imphal for almost a year with his successive bail pleas being rejected by NIA Special Trial Court in a case in which he is slapped with Sections 120B, 420 of IPC and Sections 13, 17 of Unlawful Activities (Prevention) Act. There are 5 accused, as respondents in the case, in which Samarjit is one of them.

The letter to the Union Home Minister clearly stated about the role of the BJP MP, as the Maharaja of Manipur, in the signed declaration of independence and other relevant documents. There is no mentioning of the BJP MP in the NIA case in Imphal.

The King has become MP in Rajya Sabha by joining BJP while the messenger, Samarjit, is reportedly behind bars for almost a year without any trial. There have been 18 hearings of the court in the matter and the next hearing is stated to be on March 17, 2022.

The BJP, with its deep values in nationalism and unity of the nation, is faced with serious questions as one of its Member of Parliament has not yet been cleared as innocent by any court despite and even after his name is being dragged into the case.

The BJP MP, however, refuted the claims of his signing on such papers as he maintained that he never signed any such letter on declaration of independence of Manipur from India.

Voter slip not a stand alone ID proof; Voters need to carry one of the 12 identity documents

Addiction explosion: A grim picture of the situation in…