Addressing the golden anniversary of the Dimapur Lotha Students’ Union (DLSU), Patton said “ism” has no place in the 21st century.

Nagaland deputy chief minister and also in-charge of the home department, Y Patton, on Saturday made a clarion call to the students’ community to come together while also urging them to do away with “tribalism and clanism” which according to him was destroying the very fabric of the congenial Naga society.
Addressing the golden anniversary of the Dimapur Lotha Students’ Union (DLSU), Patton said the “ism” has no place in the 21st century while maintaining that “clan system” was used for the convenience of inter-marriage by the forefathers and therefore should not be used for creating division (s).
While citing examples on the existence of “clanism” starting from students’ body election to other higher levels, Patton also appealed to every sections especially the Lotha community to not give space to any propagating clanism as it hampers growth and unity. He called for cultural preservation by giving importance on the usage of mother tongue at the same time lamented that cultural traditions were fast losing significance in urban areas. Patton also called upon all to know the history and ensure that the vision and objectives of the
founding leaders were upheld.
Earlier, he also released the jubilee souvenir at the programme and unveiled the jubilee monolith after it was dedicated by pastor Lotha Baptist Chruch Dimapur, Rev. Zanao Mozhüi. Former principal, Eastern Theological College, Jorhat, Rev. Dr. Ezamo Murry, who spoke on the theme, “envision radiant posterity”, reminded the students on the proper usage and meaning of vernacular language.Chairman Lotha Hoho Dimapur, YL Jami, and Lotha Students’ Union Wokha, president, Ashanthung Humtsoe, delivered jubilee greetings.
A dedicatory prayer for the students was offered by Rev. R P Murry and a minute silence was also observed as mark of respect to past leaders.
The programme began with an invocation by principal, Holy Cross Higher Secondary School, Dimapur, Rev Fr Philip Yanpvuthung, convenor, organizing committee, K Mhachio Odyuo, welcomed the gatherings, while presidential address was delivered by DLSU president, Benthungo Jungio.

MLA and advisor, information technology, science and technology new renewable energy, Nagaland, Mmhonlumo Kikon, said that inorder to contribute towards the welfare of the society one need to know one’s history which he said was the outmost importance.
Speaking at the afternoon session of the 2nd day of Dimapur Lotha Students Union (DLSU) golden anniversary programme at Dimapur Government College auditorium as special guest, Kikon thrust upon the student’s community present by stating that if one doesn’t know one’s own history, one would not become a “problem solver” or make an impact in any conclusive discussions and for which he called upon the upcoming generation to show and focus on handling or dealing the ongoing different issues with their positive idea and contributions.
Calling on all to be an “informed individual” and to work towards the upliftment of the student’s community in particular and the society in general, Mmhonlumo also spoke on the importance of unity, which shows the strength of a community and therefore he called upon all to be the pave maker for unity, peace and harmony.
“To unite and live together we need to comprise, take a step in front and back and move forward when needed,” Kikon said and further called upon the students to mindful on the value of time and make best use of it.
Dimapur Naga Students’ Union (DNSU) president, Moayanger Jamir, and DDLGBU chairman K Ntonsi Ngullie brought greetings to the jubilee revelers. 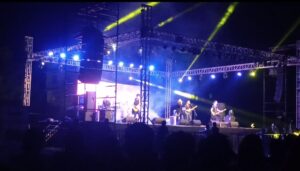 With a stage set in the backdrop of the sprawling campus of the Dimapur Government College (DGC), the venue for the 50th anniversary of Dimapur Lotha Students’ Union (DLSU), the culmination programme ended amidst a colorful display of fireworks intune with powerful performances by renowned musicians including the internally acclaimed bands “About Us” and “The Paradigm Shift”.
A seven years old guitarist or a maestro and a sensation in the social media, Gideon Kithan, while stealing the spotlight from his senior and professional musicians, he mesmerized the many hundred music aficionados who thronged the venue with his soft yet expertise fingers in strumming the strings.
Later, the young maestro was also joined by Meribeni Patton who gave a powerful performance after which it was the two internationally acclaimed bands to take the stage.
Meanwhile, MLA from2 Dimapur-II A/C, Moatoshi Longkumer, who was the special invitee, taking his time to acknowledge the DLSU and the participants of the musical evening said that music provides an opportunity that connects and bonds an individual with family and loved ones while also bringing communities together in unity.
He later said that the very musical evening was a relieve and to relax to many after the Covid-19 pandemic which had hit the world.
Retired secretary, and vice-president, NDPP, Nagaland, YM Humtsoe, also spoke during the musical evening.