Letkhosei Haokip was originally from Mongbung vill near Sangaikot village in Ccpur district. He has been staying in the house temporarily for the last two years, police added.

However, Letkhosei Haokip fled the spot leaving his car in front of his house when the combined team asked him to stop. He managed to escape from the Bongmol village side on Shangshak road despite the chase, said the police. A case has been registered at Machi PS, they added.

One white colour Mahindra SUV with Registration No. DL12CA 2729, one Mobile handset and one Aadhar card of the driver/arrested person were recovered, police said. A case was registered at Tengnoupal police station, they added. 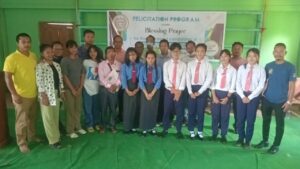 15th July 22:  Kuki Students Organization (KSO) Moreh Block felicitated top 10 HSLC/HSSLC Exam-2022 students of Moreh Block at Hill Tribal Council (HTC) Conference Hall Moreh Ward No. 8. They were given a memento and certificates for their good performance in the examinations.

Student & Guardians of Toppers were also present in the Felicitation Programme

One nabbed with brown sugar worth Rs 6.39 crore during routine frisking 17th July 2022: A team of Tengnoupal Police Station seized 73 Soap Cases of Brown Sugar weighing 3.189kgs during routine frisking and checking of vehicles at its checkpoint and arrested one.

According to the police, the team under the Supervision of SP Tengnoupal Golianmang IPS were conducting daily routine frisking and checking.  At around 4.00 pm, a Maruti Suzuki Ertiga bearing Registration No. UP 15DQ 0457 came at the check post. While checking the vehicle, 73 soap cases of brown sugar were found kept concealed inside the car.

The seized brown sugar might be worth more than Rs 6.39 crore in the international market, police said.

One Khaijang Baite of Moreh Ward No.1 Zalenphai Village was arrested at the spot.  The car used in carrying the drug was also impounded. A case has been also registered at Tengnoupal Police Station under NDPS Act 1985, police added.

During the medical camp that began around 1 pm, senior doctors of Assam Rifles conducted free health check-ups and tests. They also distributed medicines free of cost. The doctors also shared healthy habits to protect from diseases and ways to remain healthy.

At least 20 girls within the age group of 8 to 15 years were benefited in the camp.

During the drive, AMSU volunteers informed shopkeepers about banned items and warned that if any shop found dealing in such items, they will attract penalties under the new policy, said AMSU Tengnoupal District Committee Finance Secretary Thangjam Suresh Singh 19th July 2022: Prices of essential commodities have skyrocketed in India-Myanmar border town Moreh in Tengnoupal District adversely affecting low-income workers and daily wagers while running their families. Retail price of tomatoes has jumped to Rs 90 per kilogram from Rs 60 some days back while cauliflowers and beans which used to be available at Rs 85/90 are selling at Rs 120/130.

Women vendors in Community Variety Market Shed attributed the rise in price to increasing fuel prices and restriction on border trade following the death of two Indians in Tamu. Most of the vegetables are supplied either from Imphal or Myanmar. Vegetables from Myanmar got costlier as they reached market passing through various middlemen owning to existing situation caused by murder of Tamils in Myanmar, they said.

Placing Loktak Ramsar Site at the Centrestage of Sustainability

Nagaland to roll out vaccination drive for age groups of 12…