One Jamminlal Haokip claimed that Lhukhosei Zou has “no connection whatsoever with the recent seizure”. He said he was “willing and ready to cooperate with the Investigating Agency in all matters related to the vehicle”.

Reacting to news reports on the seizure of Yaba tablets/drugs worth Rs 20 crore in the grey market by Assam police and the vehicle used by those arrested, one Jamminlal Haokip, a resident of Canan Veng, Tuinom Part Ill, Moreh Ward No.7, Tengnoupal District, Manipur has clarified that he purchased and took possession of the vehicle (Tata Nexon) bearing registration No. MN01-AK-7218 from “Kimngaiching Zou, daughter of Lhukhosei Zou on October 15, 2020”. 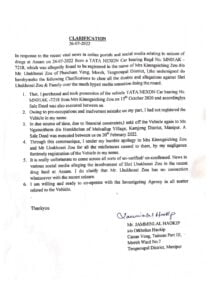 In a clarification note, Jamminlal said that a sale deed was also executed between Kimngaiching Zou and him. However, owing to “pre-occupations and inadvertent mistake on my part, I had not registered the vehicle in my name”, he said.

He further said, “In due course of time, due to financial constraints, I sold off the Vehicle again to Ms Ngaineithem d/o Hemkholun of Molvailup Village, Kamjong District, Manipur. A Sale Deed was executed between us on 20″ February 2022.

“Through this communique, I tender my humble apology to Mrs Kimngaiching Zou and Mr Lhukhosei Zou for all the misfortunes caused to them, by my negligence for timely registration of the Vehicle in my name”, said Jamminlal Haokip.

While playing down the allegation of Lhukhosei Zou being involved in the drugs seizure, Jamminlal Haokip claimed that Lhukhosei Zou has “no connection whatsoever with the recent seizure”. He said he was “willing and ready to cooperate with the Investigating Agency in all matters related to the vehicle”.

It may be mentioned that Assam Police had on July 24 arrested two persons identified as Thangkhogin Haokip and Letminching Haokip and seized one lakh pieces of Yaba tablets, valued at Rs 20 crore in the grey market, from their possession in the Koinadhara area in Guwahati. The arrested Letminching Haokip is presently posted in Maphou Dam PS as a police constable.

Based on specific input, a team of the East Guwahati Police District (EGPD) from the Basistha police station, intercepted a Tata Nexon car, bearing registration number MN01-AK-7218, coming from Manipur. During the search of the car, the police team recovered the addictive tablets, said the EastMojo report.

When the TFM Team retrieved the details of the vehicle owner through registration number, the vehicle was found registered in the name of Kimngaiching Zou as claimed and stated by Jamminlal Haokip. Digging further into the matter through sources points to Lhukhosei Zou’s family as Kimngaiching is his daughter.

If government is honest about its ‘War on Drug’, why it…