By The Frontier Manipur Last updated May 11, 2022
AKM members during a press conference
0
Share

AKM has demanded the Assam government to restore the damages done by May 12. AKM also mentioned that the reserve forest was donated by Aokum village of Tzurangkong range, Mokokchung, Nagaland

The Ao Student’s Conference (AKM), which is the apex student body of the Ao tribe in Nagaland, has voiced their concern on the reported land encroachment by people from neighbouring Assam. Border dispute has been on for decades between Nagaland and Assam.

War of words between NSCN (I-M), SC Jamir will only ‘weaken’…

Naga Issue: FA, Agreed Position did not include issue of…

In an letter addressed to the deputy commissioner, Mokokchung, on Tuesday, which was also forwarded to Nagaland home commissioner, and superintendent of police, Mokokchung, AKM president, Nundokyanger Ao, and general secretary, Nekmi Longkumer, while addressing media persons along with its other office bearers at its office in Mokokchung, stated that the “elder brother attitude” of the Assam government towards all the neighbouring states of the northeast India was becoming “unbearable”.
Making it clear that the people from the northeast are all one under the union of India and everyone is equal under the constitution, the AKM stated that a recent reports of removal of the “reserved forest signboard” was an act of “high handedness” that hurt the sentiments of all the Aos particularly the student community. 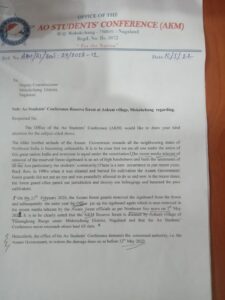 Also stating that these were new occurrences in recent years, the letter reminded that back in 1990s when the reserved forest was “cleaned and burned” for cultivation, the Assam government including the forest guards did not act at all, Moreover, the forest guards are often seen patrolling in jurisdictions under Nagaland while also destroying properties and harassing the poor cultivators.
It was stated that on February 13, 2020, the Assam forest guards removed the “signboard” from the forest and subsequently the same year, the AKM office put the signboard again which was seen removed by the Assam forest officials.

AKM has demanded the Assam government to restore the damages done by May 12. AKM also mentioned that the reserve forest was donated by Aokum village of Tzurangkong range, Mokokchung, Nagaland, and that the AKM never had encroached on others’ land till date.
Further, the apex Ao student body stated that if any “unprecedented and unwanted situations” arose, the Assam government would be held solely responsible for which the AKM awaits for prompt actions in order maintain peaceful coexistence.