Amit Shah asserted that improving connectivity, infrastructure, investment and organic farming in the Northeast is the topmost priority of the BJP government. He also said that the government is prioritizing education and sports in Manipur.

Union Home Minister Amit Shah inaugurated 12 projects worth around Rs. 300 crore while laying the foundation stones for 9 projects worth Rs. 1 thousand 7 crore in Manipur on Friday.

The Union Minister kicked off the inaugural tour at Marjing Hill Range where he inaugurated the 122 feet Marjing Polo Statue, subsequently he arrived at Churachandpur to inaugurate the Churachandpur Medical College, the first medical college in the hills district of Manipur, and in the last leg of the tour, Amit Shah visited Indian National Army (INA) Museum at Moirang where he unfurled the 165 feet high national flag, the tallest in Northeast India.
Afterwards Amit Shah along with Chief Minister Nongthombam Biren and the rest of the State cabinet attended the public conference at Chenglei Lampak, Moirang. The Union Home Minister further inaugurated the rest of the completed projects via video conference at Moirang.
Addressing the gathering, Amit Shah asserted that improving connectivity, infrastructure, investment and organic farming in the Northeast is the topmost priority of the BJP government. He said that the government is prioritizing education and sports in Manipur. Amit Shah recounted the various sacrifices made by unsung patriots of the State and added that “it is in their honour that Mt. Harriet was renamed Mt. Manipur”. He maintained that insurgency has been controlled after BJP’s ascension to power. “Now, the objective is to root out drugs from the State”, he added. 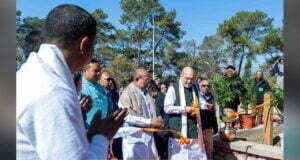 Meanwhile, Amit Shah also laid the foundation stone for the construction of 40 police outposts, 34 of which will be constructed along the Indo-Myanmar Border and 6 along National Highway 37; Manipur Exhibition Centre at Imphal East District, Youth Skilling and Employment Centre at 5 districts of the State, construction of Jiribam-Tipaimukh road, reparation of roads from Serou Lamkhai- Seluk Village via Chakpi Karong, Integrated Management System of 3 waterbodies/wetlands (Utrapat, Zaimeng and Waithou-Phumnom), revamp distribution sector scheme and BharatNet Project on OFC network and Prime Minister Gati shakti project under SSASCI scheme.

‘Two tigers in a den’, Congress reacts to…